The Serendipity of Street Photography

It could happen in an instant or build over time. It might be serious, humorous, or somewhere in between. How about curious or just mundane? It's essentially urban but it can occur in a small town. What is it? It's life, everyday life. It's human behavior. Human emotion. It's who we are. It's what the street photographer attempts to capture at its most precious moments. It's still on "film" for some, but nowadays mostly measured in bytes.

It's mostly candid, but not always. It's the spirit of the street: those ordinary or exceptional moments that would otherwise go unnoticed. The ones that touch us emotionally for untold reasons.

It has roots in painting (even some of the masters used it) and in photojournalism. It occurs in a split second when something unusual happens. It's transitory. Without that once-only moment preserved, the image would be lost forever. The street photographer transforms the ephemeral into permanency by gifting us a gem with the click of a shutter.

It can turn the unconventional, the enigmatic, the imperfect, into art. It can communicate a sentiment, a reality, a morality, a socio-political assertion, or a desire. It's a trickster. The photographer's trick though is first to see it, then recognize its merit, and then finally bring us the package signed, sealed, delivered.

But not every photographer is comfortable with street photography. It takes a certain personality. The art form is predicated not just on the shooting but on who's taking the shot. Street photography is a quirky sort of affair and not for the faint of heart. In fact, for the photographer to be a tad off kilter might even be an essential ingredient. The street photographer may actually have a take on life that begs the question, is he completely normal? (Yes, a joke, of course, but in this sense you must learn to tolerate, or even love, your local street photographer, please.)

The composition of the shot is central to good work. There are times when the action is so fast, the subject matter so unusual, and the action so unexpected, that the image comes together only after the fact: its value recognized post hoc. In this photograph (just below), captured on the street in Montreal, the idea was simply to shoot the outrageously augmented wall. Such a shot would have been sufficiently interesting in its own right, but I spotted the bicyclist coming. I hesitated. What to do? Let him pass? Include him? I wondered. But then the extravagance of the image caught his eye too. He could not resist a glance. The turn of his head created an unexpected but wonderful emphasis I could only have wished for. The image becomes that much more compelling with the cyclist's surprise appearance and his singular action. That's the essence of street photography. Simply put, what makes an image worth keeping is the serendipity of the street-- the unexpected happenstance that makes the art form come alive. 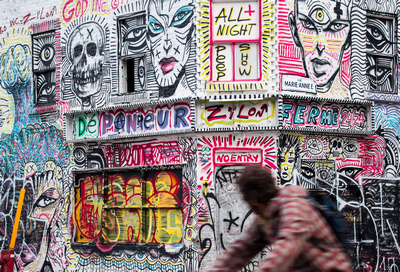 On other occasions, however, there might be a plan in mind where the idea for the shot is preconceived. The "event" hasn't happened yet but the photographer can hope. The time and patience waiting for it to evolve can test one's resolve. Will the imagined circumstances occur?  Will the image come to fruition? It can be challenging and raises all sorts of doubts about the original concept. The image below was shot in Greenwich Village. I only had a vague idea what I was looking for. Positioning myself in order to get the composition I wanted was itself half the battle. Then it was a matter of waiting. Suddenly it appeared in the lens. I fired off several shots and was fortunate to end up with a synchronous image, planned yet unexpected. I was also a little intimidated by the police car parked across the street. Had the officer seen me squatting against the building with camera in hand, who knows what he might have thought. I cropped the shot as pictured. 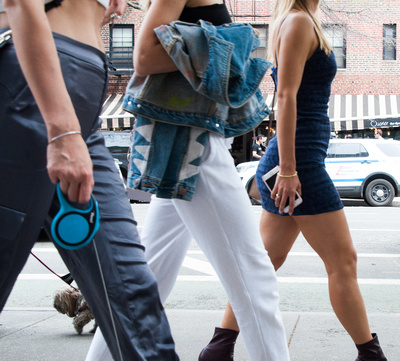 This next image I like to call "hybrid" in street photography terms because I take a piece of existing art and modify it either during the shooting or in the editing process or both in order to create a new image. This photograph, "Reflections on Rue Paul", shot in the area of Old Quebec, appealed to me because I initially loved the color and the dynamism in the painting, but by incorporating the clouds and the surrounding buildings in the reflection I was able to capture the sensibility of the moment. The art, the architecture, and the beautiful day came together in a unique and encompassing image, capturing the emotion that I felt at the time. It's interesting how, in this way, photography communicates something not solely about the subject of the image, but in this instance, about the psychology of the image maker. 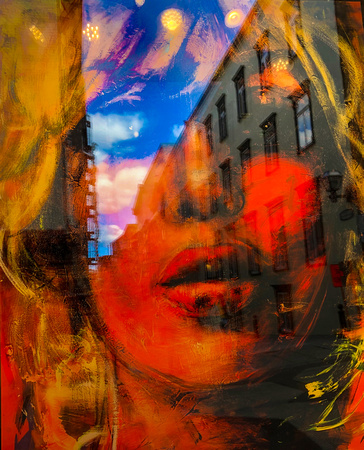 "Scootin' La Latina (Freedom Riders)": On the street, all this being said, there is no substitute for good fortune. In this next instance I had my camera at the ready because I wanted to capture the hustle and bustle as the sun was going down in this residential neighborhood in Madrid. Just at that moment, a streak of sunlight snaked its way through the buildings as a young couple scooted by as if the rays were their own private spotlight. The street scene without the scootering couple would have satisfied my original intent, but this particular moment fell into my lap. The sun peeks out, scooter appears, and the simple street scene becomes a unique moment in time, permanently recorded. 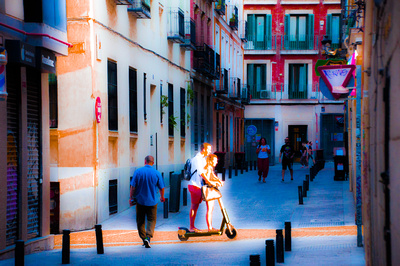 When I'm in the role of street photographer, I am either filled with anticipation, frustration, or excitation, depending on whether opportunities appear or fail to appear. There are also times when opportunities land in your lap like an offering when you least expect it-- and maybe even when you're not even thinking about it. In this unusual image, where polarities of sorts spontaneously came together, a piece I call "Transformation-Liberation #2", I leisurely reached for my camera, slipped off the lens cover, and captured the moment. On such occasions the experience is effortless. You don't seek it. The picture comes to you . 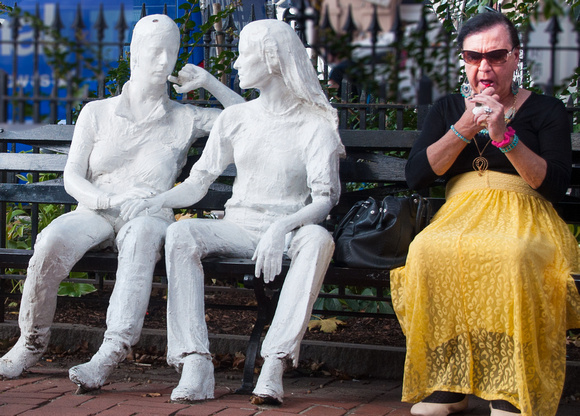 Because life itself is filled with the unexpected, because working on the street is its own magical mystery tour, enticing opportunities for the street photographer are endless. But that said, some of the more ordinary-- even mundane-- activities of daily life can still lend themselves to engaging images. More often than not-- despite the appeal of offbeat moments, special interest subjects, or the use of a clever technique-- the more successful street shots simply capture unremarkable circumstances that connect emotionally with the viewer. In this shot from Lyon, France, a woman with her dogs continues to be popular. The orange hat, the cigarette, the fan, even the dress and slippers add flavor to the picture. A lucky turn of the head by the white dog who has obviously spied something of interest, brings the composition full circle. 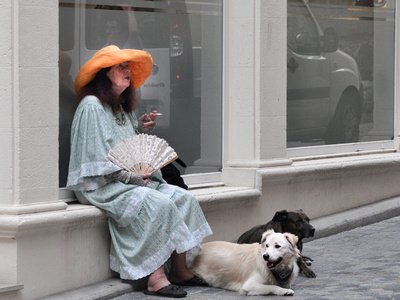 The challenge for the street photographer is to never lose hope. The images are out there somewhere. It requires time on the street scanning, positioning, and imagining-- and maybe even beseeching the 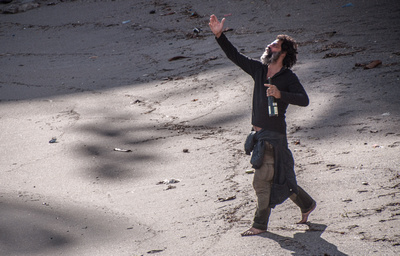 gods-- as this ardent fellow in Nerja, Spain was wont to do. Finding your image requires patience. It also requires trust that if not today, than maybe tomorrow, the opportunity will present itself. In my experience street work is one of the more gratifying and potentially creative-- maybe I'll even risk "artistic"-- types of photography out there. And when all is said and done, street photography should be a source of joy, maybe even exhilaration, and should never ever drive you crazy. Here's my sense of what can happen to a photographer who hasn't quite mastered the fine art of equanimity while wandering aimlessly on the street in search of his next image. 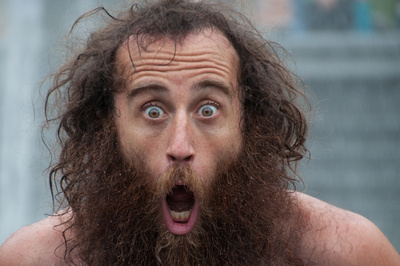 (May Be) Communicating Intensity